Nearly twenty years ago, Sadako and Kayako, ghostly stars of The Ring and The Grudge, ushered in a new era of horror that audiences found genuinely terrifying. Today, they’re social media darlings.

The juggernaut of a marketing campaign for Sadako vs. Kayako has done its best to present its characters as “scary-cute” (kowakawaii) instead of straight up “scary” (kowai). In one of a series of short videos, Sadako, Kayako, and Toshio demonstrate proper theater manners (don’t talk, no video recording, no crawling out of the screen). The three characters also took time out from their soul-swallowing schedules to toss out the first pitch at a baseball game. Kayako and her ghostly son Toshio have an Instagram account in which they share happy family photos. Each caption includes the phrase “a-a-a-a,” referencing the rattling sound that the otherwise mute Kayako makes as she crawls jerkily across the floor. 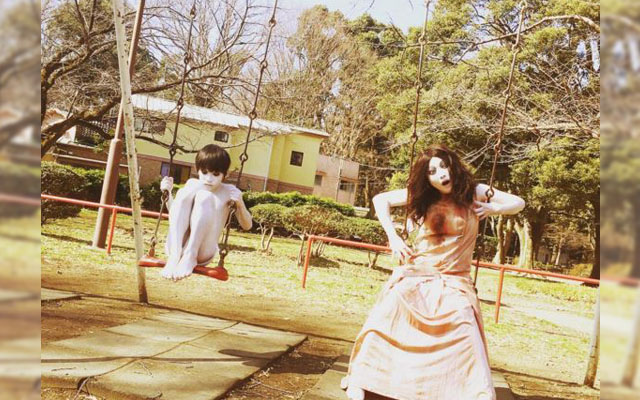 Sadako, meanwhile, has had a Twitter account since 2011, but it mostly tweets promotional materials related to the various Ring and Grudge franchises. Recently, though, it’s been filled with pictures of “kawaii” fan art like this:

The Toho theater where I saw Sadako vs. Kayako on opening weekend also had a whole shelf of “character goods” on display (pens, folders, postcards, bobble-head dolls, phone straps). Sadako has even been mashed up with the ultimate icon of cute, Hello Kitty.

For someone who remembers a time when The Grudge and The Ring were considered genuinely scary (and, judging by the reactions of some of my students viewing the films for the first time, still are), this whole marketing campaign has been a bit bizarre, if not unprecedented. As Yoshikuni Igarashi and William M. Tsutsui have noted, Godzilla famously began life as a genuinely frightening monster before being “cutified” in the 1960s. (Nowadays Godzilla seems to have returned to being scary, judging by the tone of recent previews for Shin Gojira [New Godzilla], set to be released in July 2016.)

Thus it was probably inevitable that Sadako and Kayako would eventually be cutified. Their signature characteristics–Sadako’s slow, TV-static-infused movements, her long mane of black hair hiding her face, and her one-eyed death stare, and Kayako’s jerky, crab-like crawl accompanied by a wide-open mouth, staring eyes, and a strange rattling noise–have now become endlessly imitated qualities of endearment, not markers of terror. Sadako throws out a baseball pitch and it’s kind of adorable because she can’t see. Kayako poses at a kitchen table on Instagram with her mouth wide open and arms held at odd angles in a parody of domestic bliss.

I should say that it’s not so odd for “serious” films in Japan to have humorous marketing campaigns. Horror movies, tragedies, and dramas regularly feature comedic appearances by the actors on television, or bobble-head dolls of the characters on sale in the movie theater lobby. With Sadako vs. Kayako, though, the angle is surprising because a) recent Japanese horror movies have had little in the way of marketing beyond posters and trailers, and b) the kowakawaii angle is being played so specifically.

Given the tone of the marketing campaign and the fact that Sadako vs. Kayako is directed by Koji Shiraishi, who’s made a name for himself with frequently goofy, low-budget horror films, you’d expect the movie to be tongue in cheek, maybe a bit of meta-horror in the tradition of Scream or Cabin in the Woods. But no–it’s a straight up horror film with only a few knowing asides, a movie that clearly wants to be scary (and made my audience jump once or twice), but that doesn’t really find creative ways to produce chills. Other than the appearance of two odd characters in the second half who seem plucked straight out of other Shiraishi movies, there’s nothing in Sadako vs. Kayako to suggest Shiraishi’s influence.

In short, the movie is dull.  The acting is fine, but the characters are flat. It’s visually uninteresting, especially in comparison to Kiyoshi Kurosawa’s Creepy, which was released on the same day and did endlessly mesmerizing things with framing, movement, ambient sound, and light. And it’s virtually humorless, which is particularly disappointing coming from Shiraishi, who usually manages to load his films up with snark and meta-commentary.

For what it’s worth, the plot involves two female friends, Yuri and Natsumi (Mizuki Yamamoto and Aimi Satsukawa) who decide, shortly after hearing their professor’s lecture about urban legends (a scene that feels 100% ripped off from Urban Legend) to make a DVD of Natsumi’s parents’ wedding VHS cassette. To do this, of course, they’ll need to go to a junk shop to buy a video cassette player. (I can imagine the script writers arguing about how much they’d need to explain this technology to a mostly teenage audience who may have never used a cassette player in their lives.) And of course when they open that video cassette player, out pops Sadako’s cursed video.

Meanwhile, high school student Suzuka has moved in next door to the house where Kayako and her son were murdered, and before long she’s dealing with a curse of her own. Many shrieks, sudden close-ups, and dead bodies later, Yuri and Suzuka are teaming up with a bizarre ghost expert and his blind child sidekick (really) to somehow cancel out both curses by having Sadako and Kayako attack each other. Fans hoping for an extended and creative “battle” will be disappointed to learn that Sadako and Kayako don’t actually meet until the last five minutes of the film. The rest of the movie is a series of encounters with scary faces, typically misguided horror movie decisions,  and anxious conversations about how to defeat the curse.

Sadako vs. Kayako could have been amusing if it had taken itself a bit less seriously, or if it had struck a tone closer to its (often much more entertaining) marketing campaign. Instead, it tries very hard to recapture the genuine chills of J-horror past but mostly fails. Everything surrounding this movie is a lot more interesting than the movie itself.

If you’re looking for genuine scares, check out Creepy instead. Or just re-watch The Ring or The Grudge. They hold up rather well.