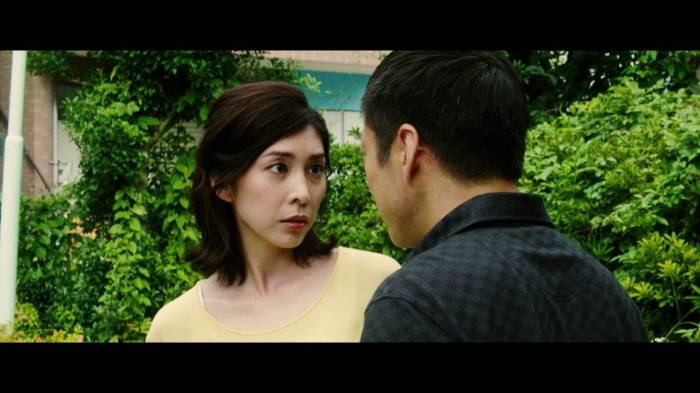 Granted, he hasn’t exactly been absent. After becoming a J-horror fixture in the late 90s and early 2000s with films like Pulse and Cure, he made a striking transition to drama in 2008 with the wonderful Tokyo Sonata, which, with its raw portrayal of the realities of middle-aged unemployment in Japan, managed to be plenty frightening without the presence of psychopaths or ghosts. In 2012 he adopted Kanae Minato’s Penance, the story of a child’s murder and her mother’s rage toward the friends that she holds responsible,  into a five-episode TV series for WOWOW. 2015’s  Journey to the Shore dispensed with murder and scares and focused on a sort of second honeymoon for a woman and her ghostly husband. There have certainly been elements of horror in Kurosawa’s work of the past eight years, but for a while it seemed as though he was moving consciously toward drama and away from the dark, slow-burning sense of unease that made films like Pulse and Cure so beloved.

Creepy is a return to the director’s, well, creepiest. This is a deeply unsettling piece of work that is immediately recognizable as a Kurosawa film. The actors are mostly familiar Kurosawa collaborators, there’s a growing sense of darkness and dread instead of jump-scares or graphic imagery, there are subtle variations in lighting and shadow throughout each scene, there’s a detective with problems at home, there’s the signature shot of a vehicle that seems to float in the clouds, and there are existential questions about how much we can ever trust or know one another. And as usual, none of the questions have easy answers.

The story, based on the novel by Yutaka Maekawa, opens with police detective Koichi Takakura (Hidetoshi Nishijima, who also appeared in Kurosawa’s Loft and License to Live) making the wrong decision in a hostage crisis. The film then jumps to a year later, after he’s retired from the force, started a new university teaching job, and moved into a new home with his wife Yasuko (Yuko Takeuchi, from the recent The Inerasable). The Takakuras are treated with cool disdain by one neighbor, who refuses to accept their moving-in gift because “obligations are a nuisance.” Their other neighbor, Nishino (Teruyuki Kagawa, the father from Tokyo Sonata), behaves bizarrely at first but then seems to apologize…and then goes back to behaving strangely. Meanwhile, Koichi, unable to stay away from police work, has begun investigating the case of a family that disappeared six years before, seeking out and  interrogating the young woman left behind.

And that’s really enough about the plot. Like Kurosawa’s brilliant Cure, Creepy sets itself up as a detective thriller but soon reveals that solving the mystery isn’t really the point. The missing person case is frightening, as is Nishino’s increasingly strange behavior, but what’s more interesting is the way that Yasuko can’t seem to stay away from him, or the fact that the other neighbor’s behavior is equally odd, or that Nishino’s young daughter seems to be a cheerful teenager one moment and a haunted, ghostly creature the next.

As Nishino, Teruyuki Kagawa gives one of the most skin-crawling performances in recent memory. He’s physically diminutive and round-faced, qualities that helped make him an object of sympathy in Tokyo Sonata and that occasionally have a similar effect here, but this time the air of menace that surrounds him is palpable. He threatens with subtle changes in posture and tone of voice, never with physical force. In one moment he seems socially awkward, then strangely cocky, then hostile, then childlike. And he has a way of making other characters think they’re the ones at fault–a quality that will come back to haunt everyone later. The other performances are all excellent, but it’s Kagawa’s that leaves the strongest impression.

Beyond the actors’ performances, Kurosawa’s visual creativity keeps things consistently engaging. This is what has always set him apart from a glut of other J-horror directors–even if the story and characters aren’t exactly new, the visual choices are enough to keep the viewer mesmerized. From the film’s very first shot, I was leaning forward in my seat. Though it clocks in at two hours and twenty minutes, Creepy never feels overlong. (The same cannot be said for the Ring / Grudge sequel Sadako vs. Kayako, released on the same day as Creepy, which is an hour and forty minutes long but seems to drag on forever.)

Little details take on growing significance in all of Kurosawa’s films. In Creepy, the wind rustling the curtains begins innocently but becomes a kind of leitmotif of unease and dread. Key images are repeated–the film opens with Koichi interrogating a man in a stark white room with barred windows, and when he comes back to that room in the second half of the film it’s under very different circumstances. Yasuko is filmed through the metal of a chain link fence as she eyes Nishino warily, but then the camera moves around to show her full face as she warms to him. Other scenes are frequently framed by shadows of horizontal and vertical lines, emphasizing the barriers between characters that seem solid but turn out to be porous.

Multiple scenes are filmed in the (rather posh-looking) offices of the university lecturers, which feature large glass windows looking out onto a campus full of students. The students hover in the background, seemingly unrelated to what’s happening inside the office, but their movements strangely mirror the tension of the foregrounded scene. At one point a group of students are seated at a table as Koichi interrogates a young girl in the office. They seem oblivious, but then one of them turns and looks directly at the scene taking place through the window. It’s a brief moment, and it could have been a coincidence, but it doesn’t feel like one.

Creepy‘s third act will likely divide viewers. Without giving anything away, I will say that the film mostly dispenses with ambiguity and that things take a decidedly dark, surreal, and slightly ludicrous turn. (This isn’t unprecedented for Kurosawa–Tokyo Sonata also featured a third act that was wildly different in tone, though things mostly returned to normal during the coda). Creepy doesn’t descend into graphic violence or gore, but the human ugliness on display is in many ways just as disturbing. I had been enjoying the ambiguity and was initially a bit disappointed to have things spelled out for me so clearly in the third act, but Kurosawa ultimately makes the shift work.

Creepy is a return to J-horror at its best–a film that not only provides chills but that examines the complexities of human relationships, the question of guilt or innocence when bad things happen to those around you, and the very question of what it is that separates seemingly decent people like the Takakuras from people like Nishino. We want to believe the gulf is vast, but Creepy hints that sometimes it’s smaller than we think.

One thought on “Kiyoshi Kurosawa brings back the chills with “Creepy””