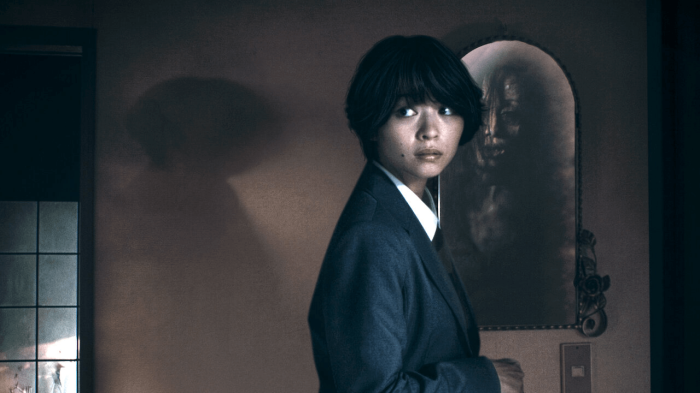 Kiyomi (Ririka) is in for a world of meaningless hurt in Ju-on: Origins.

(This is one of the ones I watch so that you don’t have to, folks. Spoilers ahead.)

Against all odds, I still hold out hope for Japanese horror—that it can once again weave genuinely interesting, artfully directed stories in the tradition of Cure and Dark Water. That the next offering won’t be yet another slog through familiar cliches and sloppy writing. That at the very least, I’ll get a chill or two.

Sadly, Ju-on: Origins may have killed that very faint hope.

It’s not just that the Netflix series is bad. It’s that it’s bad in a way that’s misogynist and gross, and that violates so many of the basic principles of what made the best of J-horror interesting and meaningful. I’m reminded of the very justified outrage that greeted the end of Mike Flanagan’s adaptation of The Haunting of Hill House, which had been an effective (and frightening) series until it decided to severely undermine Shirley Jackson’s original work by rewriting the novel’s last line. Ju-on: Origins does something similar, but on a much larger scale.

The plot is a muddled mess, more of a collection of bad things happening to people than anything resembling a coherent narrative. As with the original films, it revolves around a creepy house that seems to curse whoever comes into contact with it. The timeline jumps between the eighties and the nineties. A teenage girl is lured to the house by her new classmates and raped (that scene goes on for a very long time). A paranormal investigator looks into a young actress’s story of a supernatural event. The actress’s boyfriend dies suddenly after entering the creepy house. The high school student has a child with her rapist and grows up to be a drug-addicted sex worker. A pregnant woman attempts to murder her spouse so that she can be with her lover, but he murders her instead. And so on, and so on, for eight half-hour episodes that felt much, much longer.

There’s also a scene where—I kid you not—someone pulls a ringing telephone out of a woman’s bloody womb. Just…because.

Beyond just being a mess of bad writing and convoluted structure, Ju-on effectively dispenses with everything that made the best of J-horror compelling. For better or worse, films like Pulse, The Ring, and the original Ju-on thrived on ambiguity and the terror of the unseen. It’s not that everything was kept out of the frame, but the careful, limited use of shocking imagery and gore was, in the early 2000s, a nice antidote to torture-fests like Saw, Turistas, and Hostel that were dominating the U.S. horror market. We caught glimpses of strange things lurking or scurrying in the shadows, but we rarely saw them in their entirety. The tension came from wondering what, if anything, we might see, and from seeing odd things—a woman moving strangely, a child in a raincoat on a video monitor, a door covered in red tape—that gave us a slight feeling of unease.

The original Ju-on film did feature the very frightening figures of Kayako and Toshio, the deathly pale mother and son whose ghostly rage reached out from beyond the grave. But their images weren’t overused, and what was often more frightening was seeing the hint of a hand in someone’s hair, or hearing Kayako’s signature death-rattle and creaking bones before actually seeing the woman herself. We also, thankfully, were never forced to watch Kayako and Toshio’s final moments, or any of the other horrific incidents that might have caused the house at the center of Ju-on to become infused with malevolent energy.

Ju-on: Origins apparently decided that strategy wasn’t working. So instead of ambiguity or the dread of wondering what might have happened, we get a succession of depressing and violent scenes—most of them featuring women being brutalized in some way—that ultimately add up to very little except a desperate desire to shock.

Female terror in horror movies is certainly nothing new, but in recent Japanese dramas and horror films it’s frequently mixed with a strange fetishization of female cruelty. Nakashima Tetsuya’s films (Confessions, The World of Kanako) revel in it, presenting an utterly nihilistic (and dull) vision of humanity where beautiful women relish poisoning children and take voyeuristic pleasure in watching their friends be abused. In Ju-on, the victimized high school student’s most vicious bullying comes at the hands of her female classmates and her own mother, who blames her daughter for “seducing” her father. In Ju-on: Origins, almost all of the women exist either to suffer or inflict pain.

Ju-on: Origins’ most depressing shift, though, is in turning the original story of an abused wife into the story of a philandering and unsympathetic one. Ju-on’s Kayako was murdered by her husband because he suspected that she was having an affair, and that Toshio might not be his child. It’s her rage, and her child’s rage, that powers the Ju-on curse. And it creates an interesting tension—Kayako and Toshio are terrifying, but they’re victims of violence, and as a result at least somewhat pitiful in their pain.

Not so with the pregnant Chie, who coldly tells her very normal-seeming husband that she’s never been sexually attracted to him and matter-of-factly drugs him so that she can be with her lover. When her husband murders her instead (seemingly possessed by a malevolent spirit), it feels like self-defense. The narrative of women raging against a lifetime of violence has shifted to focus on a stereotypically cold, shrewish wife who the series seems to suggest had it coming to her.

It’s entirely possible for films and TV series to be grim and still be satisfying movie experiences (see the truly wonderful Relic for a recent example). But Ju-on: Origins and J-horror properties like it simply feel like meaningless parades of misery, with horrible things happening to both good and bad people, neither of whom we care much about, because we haven’t really been given any insight into who they are as people. J-horror at its best usually understood that less is more when it comes to shocks and suffering. It’s a shame that Ju-on: Origins forgets that.