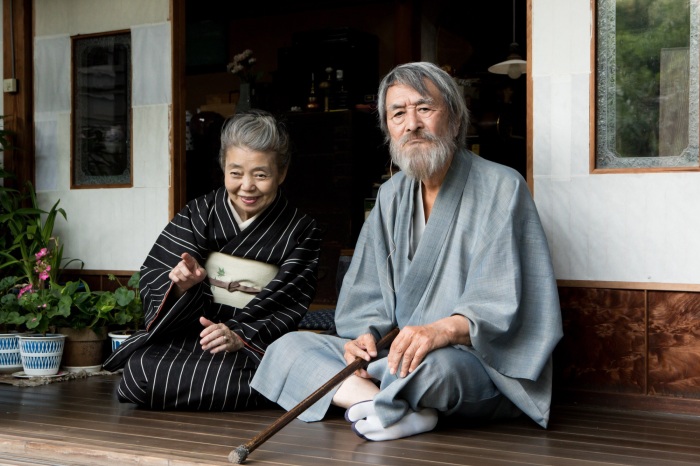 Kiki Kirin and Tsutomu Yamazaki in Mori: The Artist’s Habitat.

There are actors who have to do very little to be captivating on screen, who are a joy to watch even when they’re simply sitting silently and staring out of a window. Mori: The Artist’s Habitat (Mori no iru basho) is lucky to have two of them: Tsutomu Yamazaki, who has made a career out of playing stern-faced, emotionally distant men in films like Tanpopo and Departures, and the late Kirin Kiki, whose career also spanned decades and included recent, lauded appearances in several Hirokazu Koreeda films.

The movie that surrounds Kirin and Yamazaki is a light breeze that gives them room to simply enliven the screen with their presence. Written and directed by Shūichi Okita, who’s recently made a name for himself directing episodes of the Netflix drama Hibana (Sparks, 2016) and creating other light character studies like The Woodsman and the Rain (Kitsutsuki to ame, 2012) and Ecotherapy Getaway Holiday (Taki wo mi ni iku, 2014), it’s the story of a very brief period in the life of renowned artist Morikazu Kumagai (1880~1977), known mostly for his very simple, colorful drawings that won him fans across generations. In the film, which is set just before his death, Kumagai is 94 and has barely ventured beyond the wall surrounding his home and garden in 30 years. He spends his days contemplating insects and smoking his pipe at various spots in the garden, only vaguely aware of the steady stream of friends, art dealers, and fans who come seeking an audience with him. His wife Hideko (Kirin) and a full-time housekeeper (Nobue Iketani) keep everything in order, having long since grown accustomed to his eccentricities.

Yamazaki inhabits this role completely, shuffling around the garden in his traditional hat, yukata, and wooden geta, leaning on two walking sticks and grunting with the effort that a simple stroll takes. Tellingly, the film opens with a long, lingering look at his artist’s studio, but we never see him paint—his real studio, the film seems to suggest, is the garden, where he can stare for hours at ants moving back and forth across the dirt or fish in a small pond.

In shots that are reminiscent of both Ozu and Koreeda, Okita often sets the camera down in the house’s main living space and simply lets us observe the frenetic movement that Mori seems oblivious to: the phone ringing, visitors arriving and leaving, food being served, deliveries and repairs being made. Everything that happens is connected to the mostly-silent genius sitting in the garden, but he’s blissfully unaware of all of it. Sometimes we see him tucked away in a corner of the garden, or maybe moving across the back of the frame like a ghost.

Like the tranquility of Mori’s garden, the film itself is frequently under threat from unwelcome invaders—in this case, odd forays into slapstick comedy. There’s a running joke about the middle-aged housekeeper being man-hungry that never really lands. At one point, for no discernible reason, two large pots fall from the ceiling onto two characters’ heads. At least one or two characters have over-the-top reactions to Mori’s strangeness that feel out of place next to Kirin and Yamazaki’s mostly understated performances.

Thankfully, those invasions don’t last long, and when the film relies on the more natural humor of the “oblivious artist” situation things are much better. Though a subplot about a condo developer also threatens to overly complicate things, that too is mostly kept in the background. Instead, the film focuses on the comforting world that Mori and Hideko have created for themselves—or really, the world that Hideko and the housekeeper work very hard to maintain for Mori. The banter between these three characters never feels less than authentic.

As Mori’s wife, Kirin does what she’s been doing so well for decades: plays a mix of no-nonsense endurance and lighthearted sweetness, her laughter and easygoing presence the perfect foil to Yamazaki’s mostly silent, stern-faced artist. Every now and then, though, she reveals glimmers of vulnerability—when Mori casually mentions that he’d love to live his life over again, or go on living forever, she chuckles and says that she’d find it too tiring. Late in the film she alludes to losses and hardships they both suffered long ago that are never elaborated on, though we can sense pain lurking just beneath her smile. The film has no tragic deathbed scenes or genuine tearjerking moments, but watching Kirin onscreen and knowing that we won’t be seeing more of her is enough to break your heart.

It was a wise choice, I think, to not depict the life of Morikazu Kumagai in a sprawling biopic, focusing instead on the mundane details of day-to-day life in his twilight years. As portrayed in this film, at least, he clearly wasn’t interested in the fame that his long art career had brought him. When we first see him, he’s tucked into a corner of the garden, blending in to the point that we almost miss him. It’s not so farfetched to think that that’s how he might like to be remembered—visible, but not standing out.