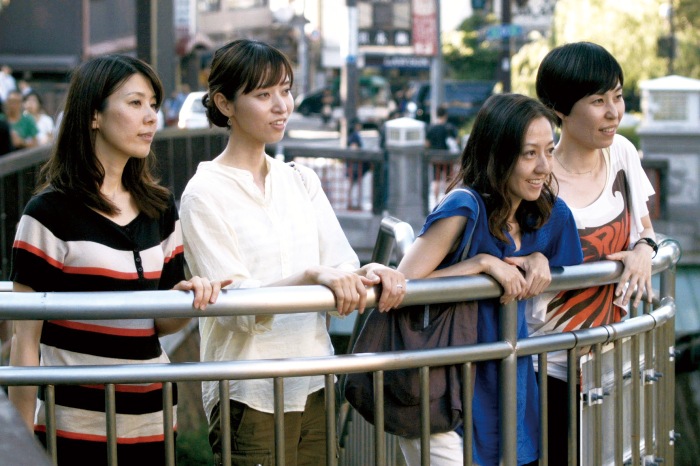 There’s a moment that arrives after a long time spent in other people’s company, especially after consuming copious amounts of food and alcohol, when polite veneers drop and people start saying surprisingly intimate and private things. In Japan, it’s generally understood that (particularly if people are intoxicated) none of this will be spoken of after everyone has stumbled home, giving people the freedom to unload and speak openly in a country where everyone tends to be very, very careful about what they say.

Watching Happy Hour, I eventually felt like a participant in one of those late-night conversations, so deeply had I come to know the characters at the film’s center. And I was allowed to reach that moment thanks in no small part to the film’s epic running time. Happy Hour is over five hours long, and thus certain scenes—of an extremely awkward self-help workshop, a short story reading event, and long conversations in bars and cafes—are allowed to take place almost in real time. Sometimes this feels a little too real—the book reading event definitely goes on a bit longer than it should. But most of the time what’s happening on screen is so engrossing that we’re happy for the scene to continue.

Director Ryusuke Hamaguchi loves to let the camera linger on a scene much longer than one would expect. He seems less interested in the big blow-up than in what happens afterward—how other characters process and react to what has just happened, the silences and shifts in body language that tell us so much. There are times when this becomes genuinely painful and you find yourself wishing that the film would cut away to another scene—and yet at the same time you can’t look away.

Happy Hour’s length may be epic, but it’s not a historical drama taking place over generations. The film’s narrative spans only a few months in the lives of four thirty-something women living in the port city of Kobe. Akari (Sachie Tanaka) is a divorced nurse whose delightfully blunt way of speaking hides a desire for genuine intimacy. Fumi (Maiko Mihara) is an art space curator married to an editor who seems to have the only satisfying (and egalitarian) marriage in the group. Sakurako (Hazuki Kikuchi) is married to a mostly-absent civil servant and has a teenage son. Jun (Rira Kawamura) is married, but we learn very early in the film that she is in the middle of a bitter court battle against her husband, who refuses to grant her a divorce.

Happy Hour is mesmerizing in its deeply nuanced portrayal of these four women. By the end of the film we feel that we know them all intimately, but also that there are facets of them that will always be hidden, both from themselves and from each other. When the movie ended I found myself still wanting to spend more time with them, to see where the various choices they’d made in the film would lead them.

All of the performances are excellent and delightfully naturalistic—the women and the people who surround them feel familiar, their conversations unscripted. Akari is a breath of fresh air in an environment where women are expected to be deferential and cautious. Sakurako reveals volumes through her careful smiles and haunted eyes. Fumi is poised, calm, and polished, so it’s immensely satisfying when her facade finally cracks under harsh questioning from Akari. Jun is the enigma who nonetheless radiates warmth and devotion to her friends in the midst of a painful domestic situation. When dramatic moments happen they’re often revealed through very subtle shifts in facial expressions or body language, which we might not have noticed if we hadn’t spent so much time with the characters. One could argue that the movie didn’t need to be five hours long, but I’d argue that it’s exactly as long as it needs to be to make the gut-punch moments really count.

Happy Hour is also that rare gem that cares deeply about the inner lives of multiple female characters, examining them not as extensions of the men in their lives, but as individuals. These women are complicated, flawed, sexually assertive, and not defined by their husbands and love interests, even if much of the film’s focus is on marriage and relationships. All four of them are at an age when the illusions of their youth are starting to fade, and when they must decide how much effort they still want to put into maintaining those illusions. More than anything, they all want something that the men in their lives can’t seem to provide: to be seen, not as wives or mothers or potential sex partners, but as multi-faceted human beings worthy of respect and admiration.

Modern Japanese cinema often depicts marriage as something between absolute misery and an inevitable grind, with much of the blame falling on male characters who are  boorish, emotionally stunted, selfish, or some combination of all three. Happy Hour, in contrast, depicts marriages and relationships that are complex—not blissful, certainly, but not entirely onerous. Ultimately the cracks in everyone’s marriages seem to come down to misguided expectations on both sides, as well as a frustrating inability to simply ask for what they want. While we’re clearly meant to sympathize with the women, they’re never depicted as saintly, and I occasionally found myself siding with one of the husbands.

Happy Hour also vividly illustrates the way that, in a country that puts young, virginal women on the highest pedestal, married and divorced women live in a state of constant precariousness. As a divorcee, Akari’s options for future relationships are limited, and despite being the most experienced nurse in her hospital, she must constantly deal with patients who prefer the less competent nurses simply because they’re younger and prettier. Sakurako and Fumi are still married, but the specter of adultery hangs over both of them—Fumi is wary of the very young author that her editor husband spends so much time with, while Sakurako’s husband works a lot of very late nights, which is never a good sign. Society has forced all of these women to exist within a very fragile structure, but it gives them few options for what to do when that structure falls apart.

So many moments in Happy Hour are prefaced with a character saying “I don’t know if I should say this,” which becomes a kind of shorthand for “I’m about to dispense with small talk and tell you something meaningful.” The movie is constantly letting us in on a secret, showing characters at their most raw and vulnerable. It’s a movie about the painful, revelatory process of discovering one’s most intimate self…and then discovering that this revelation can lead to even more questions than answers. It’s a credit to the film and the performances of the four actresses that after five hours, I still wanted to see more of that journey.

One thought on “Happy Hour”