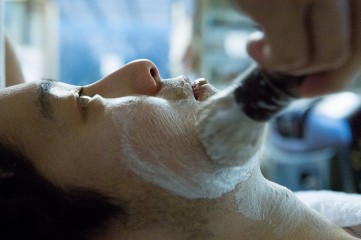 The June 11 evening program of the 2016 Short Shorts Film Festival (Asia & Japan 3) featured two remarkably good films and much better English subtitling for all three films.
One of the films, Hiroyuki Shintani’s Kamisori (Razor), was one of the best Japanese films I’d seen in quite a while.

Summary: A family-owned barber shop is the setting for an increasingly tense conversation.

Shintani clearly knows how to make the most of the short film genre. He limits his setting (a very small barber shop), doesn’t move the camera around too much, and conveys volumes with just a few looks and nervous laughs between the actors. Amazingly, this is Shintani’s directorial debut, and he even did double duty as one of the three actors–you’d never guess it was his first time to play both roles. The tension in this quiet little thriller-drama builds and builds without devolving into melodrama, and the ending is perfect. Trailer here.

Summary: Desperate to pay off a debt and dealing with the unexplained death of his livestock, a farmer visits his family in Shanghai to ask for money.

Another gem that’s buoyed by a heartbreaking performance from actor Wang Zhihua. The camera focuses on so many interesting details: the way Wang carefully puts on a wig to hide his grey hair before heading off to Shanghai, the way his lined face seems to be a mix of perpetual despair and hope, and the way his first Starbucks latte sticks to his mustache and beard. I’m thrilled to hear that Cathy Yan is developing a feature length version of this story with Jia Jiangke as executive producer. Check out the trailer here.

Summary: A teenage girl tries to jolt her father out of his depression by imitating a famous comedian’s catch phrase.

Some famous Japanese comedians are known for having a gimmick (a gyagu) that they repeat over and over. It’s usually a single word or phrase delivered in an odd voice, often accompanied by some sort of goofy pose. It’s a mystery to me why anyone finds this funny, but apparently they do, because these gyagu are endlessly replayed on TV and repeated by children and adults alike. If you’re into this sort of thing, you might find this film–which features over-the-top shout-acting that’s typical of mainstream Japanese “comedies”– amusing. I’m not, and I didn’t. Trailer here.